The UFC featherweight champion recently spoke with man of many and gave her three choices. Alex Volkanovski started with a very surprising choice, Conor McGregor.

“McGregor is obviously going to have to be in this conversation because you’re talking about succeeding. Does he sometimes do stupid things? Is he a model? But at the same time look at the legacy he left behind. Look at the money he made. He is successful. He doesn’t even have to fight anymore. Even after this career, we fighters have to have goals, and he showed that. He raised the bar when you look at him that way.

The next pick Alex Volkanovski picked was an easy pick. He went with former UFC welterweight champion Georges St-Pierre.

“Then you have guys like GSP doing everything right. Was true to himself and then was able to still be the man. He still has a great legacy and he didn’t have to be someone he wasn’t. It’s something that I admire and I think it’s pretty amazing. Has the game changed? Yes it is. Have things changed? Yes it is. But I mean, for him to do what he’s done and be in the position he’s in right now, he’s pretty amazing, and to be the person he was the whole time I admire that.

“It’s amazing for him to have such a vision and I’m just starting to have that vision. Those are the conversations that I’m starting to have now. And even before Izzy was in the UFC, the vision that “He had to talk about legacy and capture moments. It took me two years as a champion to be like, ‘Oh, you know what? Let’s raise the bar.’ I’m just a humble guy.

He continues, “So seeing guys like Izzy doing what he does. Even now, to be true to himself and to remain the loyal man that he is. Yeah, a lot of people don’t see that, but he’s a loyal guy. Family man. And at the same time, he has a lot of eyes on him and he does his thing. And whether you like it or not, it will. And the eyes are on him, so you have to respect that. 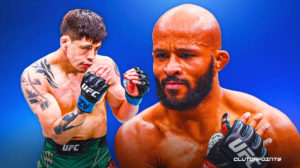