According to Sonnen, Jones played too safe in avoiding Ngannou, only to express interest in fighting “The Predator” after what he perceived as a lackluster performance. During an episode of his YouTube show, Sonnen said:

“Two people wanted to fight Francis after that performance. One was Tyson Fury. Now I can’t give Tyson a hard time because Tyson wanted to do it before the performance, not right before Francis was passed. Tyson was on board anyway so Tyson is fine here. The other one to do it is Jon Jones who lost his balls two years ago. Jon was offered this fight a couple of times and said no. These weights heavy came out, they looked terrible everywhere.

It was widely rumored that Jones will fight for the heavyweight title after Ngannou defeated Stipe Miocic at UFC 260. However, the rumblings were for naught as ‘Bones ‘would have wanted more money to fight’ The Predator”.

In the aftermath of UFC 270, Jones sparked the conversation by saying he was excited to challenge for the heavyweight crown upon his eventual return.

If this is the pinnacle of heavyweight fighting, I’m thrilled. I still have records to break

If this is the pinnacle of heavyweight fighting, I’m thrilled. I still have records to break

He also took a shot at Ciryl Gane, who many thought was the best heavyweight fighter ahead of UFC 270.

Francis Ngannou has many options after beating Ciryl Gane at UFC 270. Amid his contract dispute with the UFC, the Cameroonian has said he is ready to stay with the promotion as long as he is offered a contract that would allow him to pursue a career in professional boxing.

However, ‘The Predator’ has made it clear that a highly anticipated matchup with Jon Jones is no longer on the table. At the UFC 270 pre-fight press conference, Ngannou addressed the potential fight with Jones, who has teased his move up to heavyweight over the past two years.

“No, I’m done with this fight. I’ve been waiting for this fight for so long. After Stipe [Miocic], it was supposed to be Jon Jones and it never happened. I do not know why. So I continued.”

Watch Francis Ngannou during the UFC 270 pre-fight press conference below: 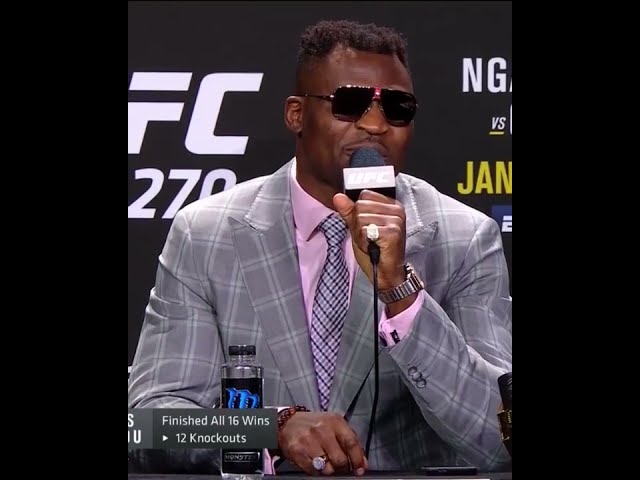