John McCarthy recently offered fans insight into Gegard Mousasi’s decision to part ways with the UFC and partner with Bellator. He admitted that despite being on a winning streak in the UFC, Mousasi jumped ship for Bellator in hopes of landing a more lucrative contract.

Mousasi signed with Bellator in 2017 after racking up a 9-3 winning record in the UFC. Just before moving to Bellator, Mousasi made an absolute tear, recording five wins on the trot.

In a conversation with Josh Thompson about the latest edition of the Weighing podcast, McCarthy revealed that the prospect of consistent and better pay seemed more enticing to Mousasi.

He further admitted that Mousasi’s deal with Bellator was far better than anything the UFC had to offer at that time.

“He went on a five-fight winning streak. Do you think the UFC wanted to lose him? They didn’t want to lose him… That’s also how your deal is structured, you know. The UFC is very , you know, straight down the line. They’re doing a 50-50. You got a show and a win. It’s a 50-50 split. So, you know, Gegard, let’s be honest, he didn’t a 50-50 split, okay? He gets paid when he gets paid, no matter if he wins or loses. It’s a nice element for him that he doesn’t have to worry about, he knows exactly what that he will win.

Check out John McCarthy’s take on Gegard Mousasi’s move to Bellator below:

Gegard Mousasi recalls his interaction with Austin Vanderford in a sauna

Gegard Mousasi recently successfully defended his title against Austin Vanderford at Bellator 275 in Dublin. Mousasi recorded the victory by TKO in the opening frame of their clash.

The day after his fight with Vanderford, Mousasi opened up about meeting Vanderford and his wife Paige VanZant in a sauna. He offered fans a glimpse of the exchange during a chat with Ariel Helwani on the latest edition of MMA time.

“[Austin Vanderford] came in and I said, ‘No opponents are allowed.’ And it was nice. He’s laughing. And then I said, ‘Are you going to go for the single leg?’ And then he must have laughed. And then at the end his girlfriend [Paige VanZant] sat there and wanted to take my underwear off to see my weight. So I said, ‘Can you leave?'”

Check out Gegard Mousasi’s interaction with Ariel Helwani below: 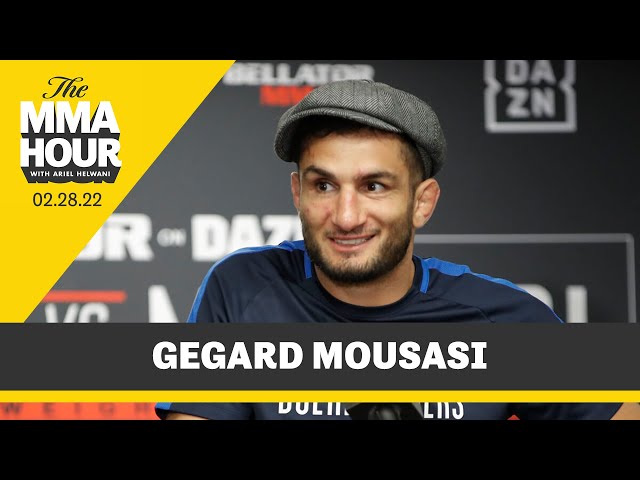